The VZLUSAT-2 nanosatellite, designed and constructed at the Czech Aerospace Research Centre (VZLU), has been successfully integrated into the deployer and is ready for its launch with Spaceflight Inc., which should take place on January 10, 2022. The second VZLU satellite will be launched as a part of the Transporter 3 mission onboard Falcon 9 launch vehicle.

Due to the one-year launch delay caused by the problems of the original launch provider (Momentus Inc.), VZLU performed additional tests to verify the condition of the satellite prior to the integration. „The conducted tests showed our satellite is in a very good condition. Of course, it was necessary to recharge the on-board batteries. The integration itself then continued exactly according to the procedure without any issues.”, adds Petr Svoboda from VZLU.

The integration into the deployer took place in Seattle. From there, the satellite travelled to Cape Canaveral, where the entire deployer carrying several satellites will be installed within the Falcon 9 fairing. The Transporter 3 mission will launch private and government nanosatellites and targets sun-synchronous orbit at an altitude of 500 to 600 km.

The primary mission goal of VZLUSAT-2 is to verify technologies for future missions of the Czech satellite constellation – the nanosatellite will be equipped with an experimental camera and a unit for precise attitude control. In addition, the satellite carries the second generation of devices which have already proven their qualities on the previous VZLUSAT-1 satellite, as well as several devices supplied by Czech universities and private companies.

VZLUSAT-2 is based on the proven CubeSat concept, which allows to build up the nanosatellite from “cubes” of 10 x 10 x 10 cm, with their configuration being dependent on the type of mission. In the case of VZLUSAT-2, a concept of 3U design with three “cubes” has been selected, allowing for installation of cameras and other experiments.

The launch ticket for VZLUSAT-2 was provided by Spacemanic, the mission partners are the companies esc Aerospace, TTS, Rigaku Innovative Technologies Europe, ADVACAM, Eltvor, Needronix, Konkoly Observatory and the universities Czech Technical University in Prague, University of West Bohemia in Pilsen and Masaryk University in Brno. The project was supported by the Technology Agency of the Czech Republic and the Ministry of Trade and Industry. 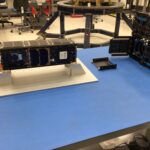 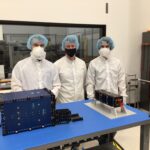 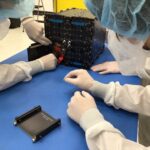 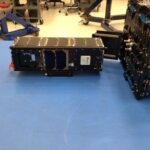